Hello all! I’ve been absent for a while, mainly because things are happening at my school! This is exciting, and my plan is basically to throw bunch of balls in the air so that I can focus on many things at the same time. Those who know me know I love to multitask, and I’m forcing myself to do it so that I don’t go crazy.

I’m part of a 20 volunteer grant involved in getting new books donated to our schools as part of a program called Books for Africa. This in turn is helping me motivate the librarians at my school to move old, outdated books out of the library and into a storage room. Why not use the books for raw material or burn them, you may ask? (We burn a lot of trash here.) One of the librarians told me that the Ministry of Education recycles a lot of old books, so they go to the school and pick them up to take them to the recycling place somewhere in Kampala (or Entebbe?). So I’m planning to meet with my principal to work out a storage place where they can go. This isn’t even thinking about the larger plan, which is moving the library to a larger building (right now it’s cramped and dark and not cleaned very well). But that’s for the future.

I’ve started teaching ICT – Information Communication Technology, for those who were as confused as I was when I first heard it. Basically it means computers. Until this week, I was only teaching theory, as we hadn’t tested any of the computers or husks of computers which were hanging out in the lab. The second man in charge for ICT came back from his university studies this month, and he’s been crazy helpful. He actually knows a lot more about computer hardware, and especially power regulation in a country where power is not reliable or steady. 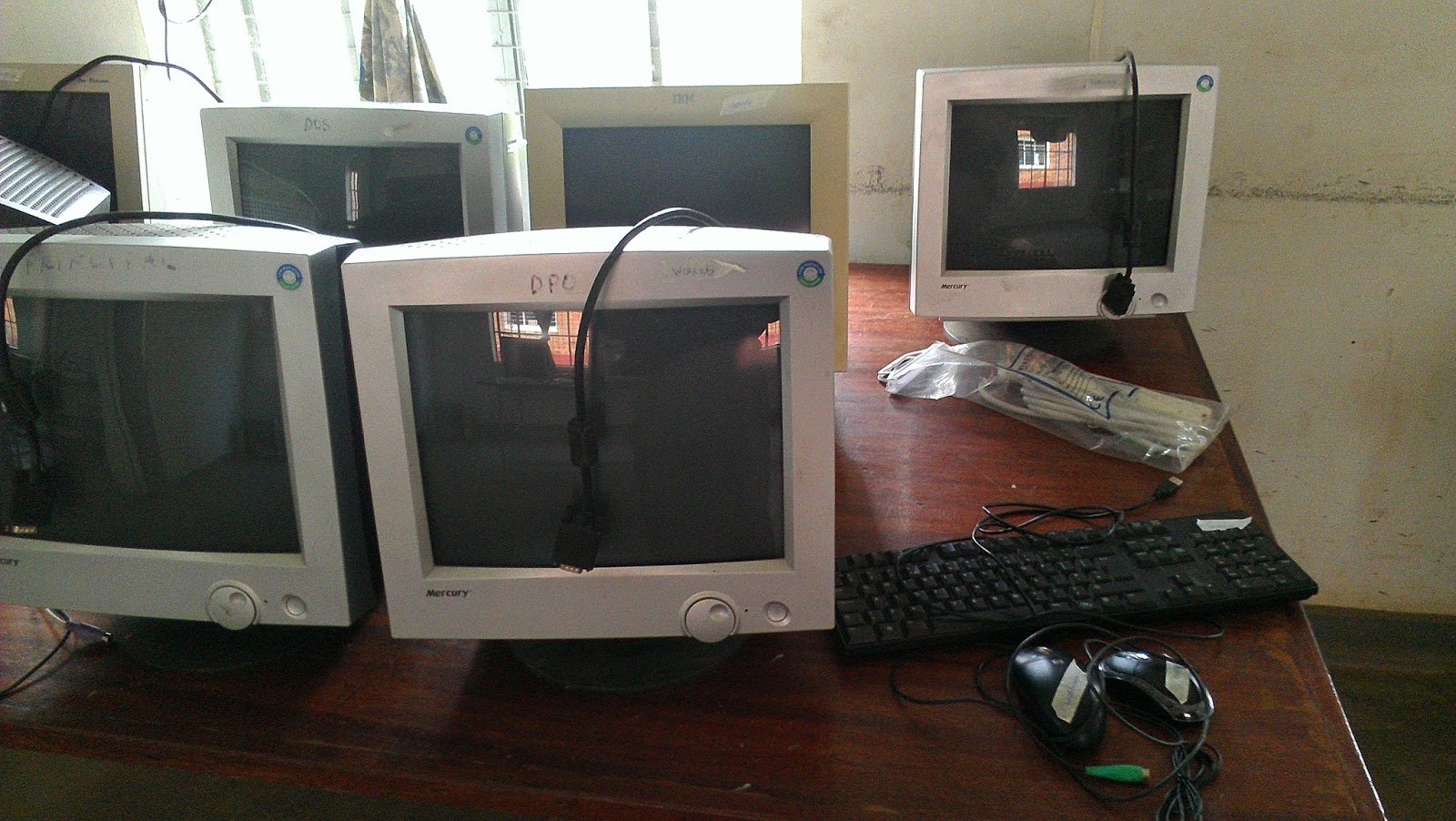 The parts which are working. 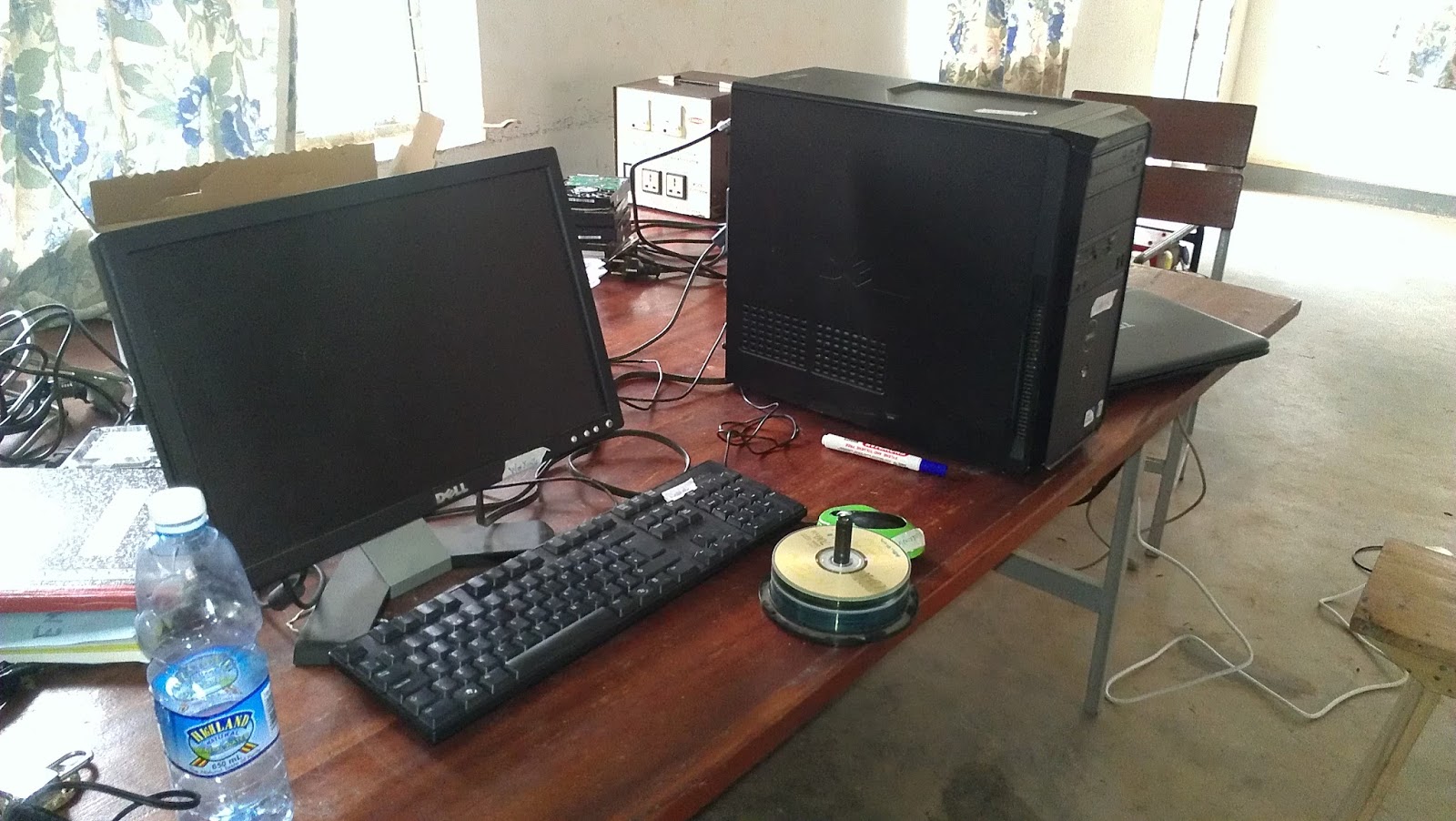 One of the working computers, set up so we can install some software. 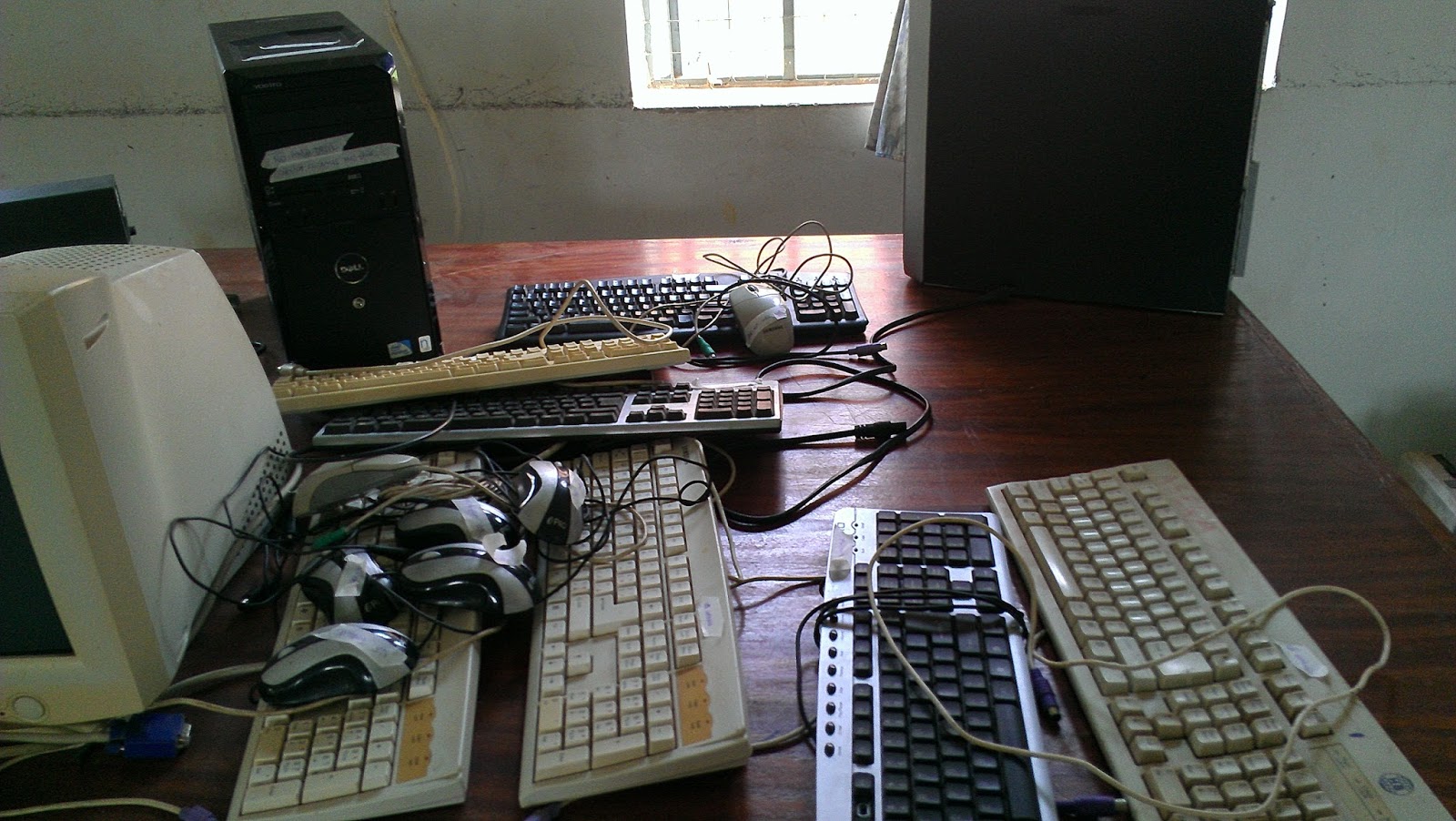 The parts which are not working. Looks like a lot of Googling for me. Is it worth it to fix keyboards and mouses? 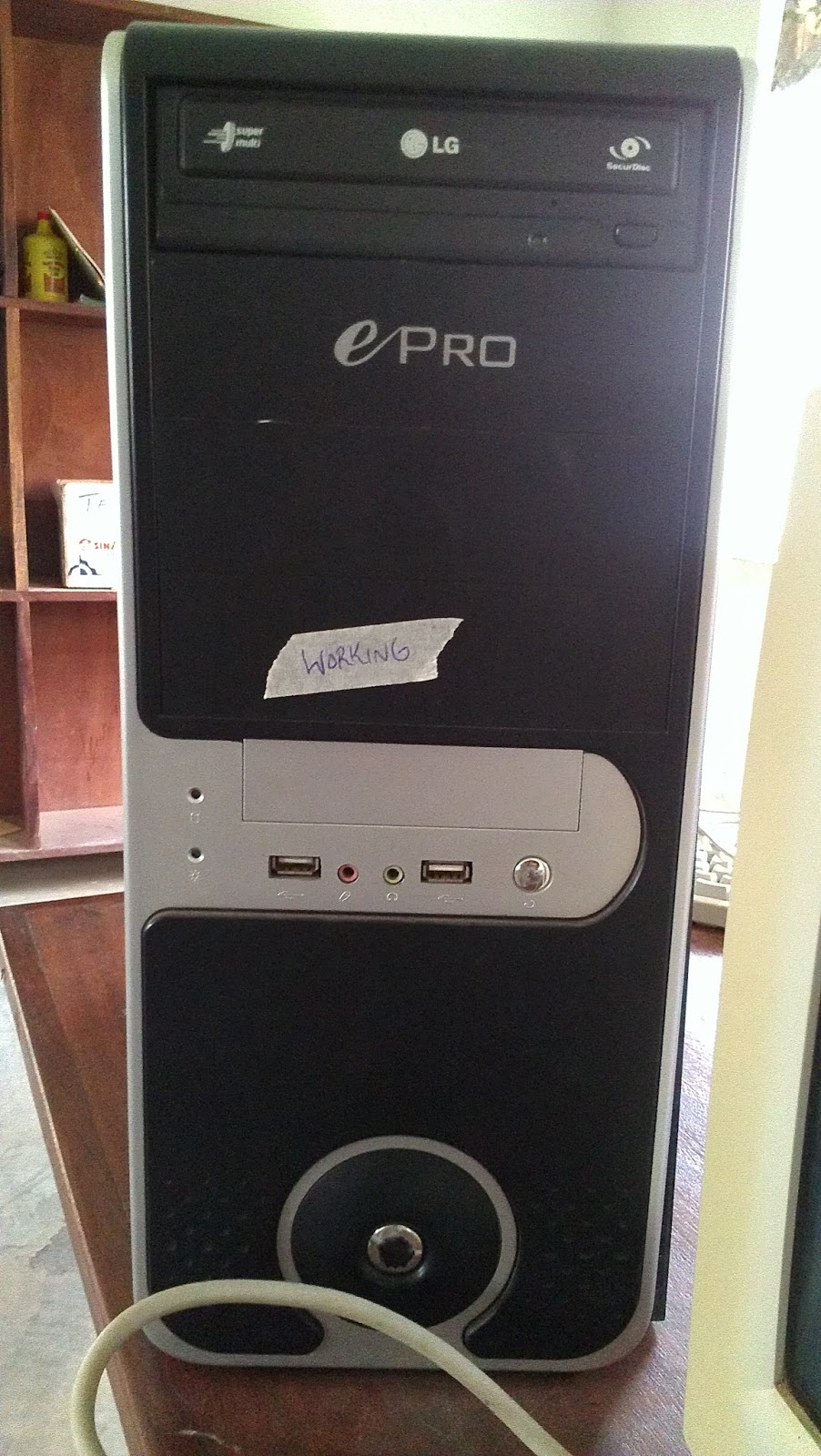 The other working tower which is not hooked up at the moment. We had to move a hard drive from a different tower into this one to get it to work. 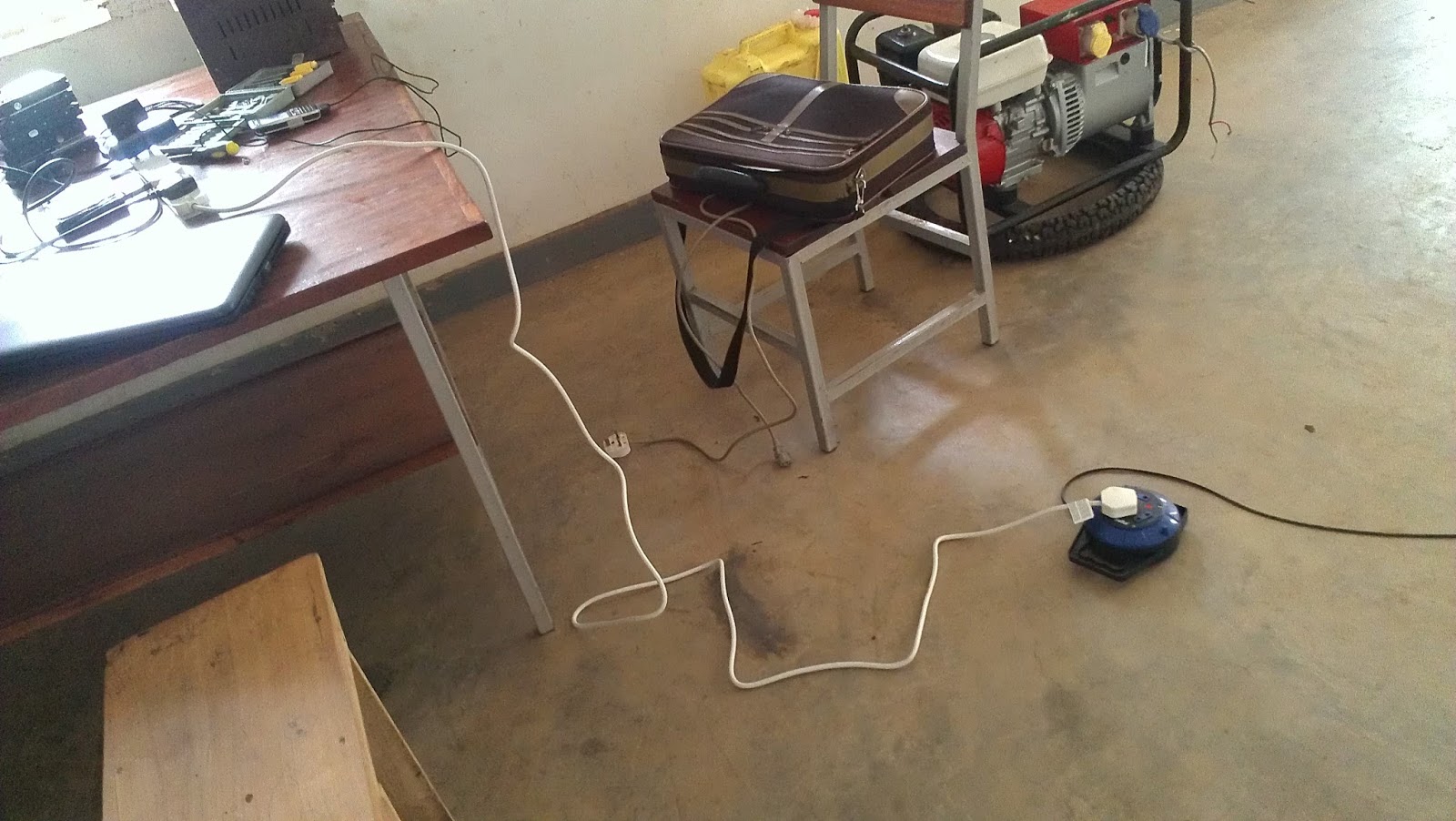 Our power setup. The extension cord is running to solar. We found out the limits of this, as the battery died after about 5 hours of desktop use/people charging their laptops/phones/etc. 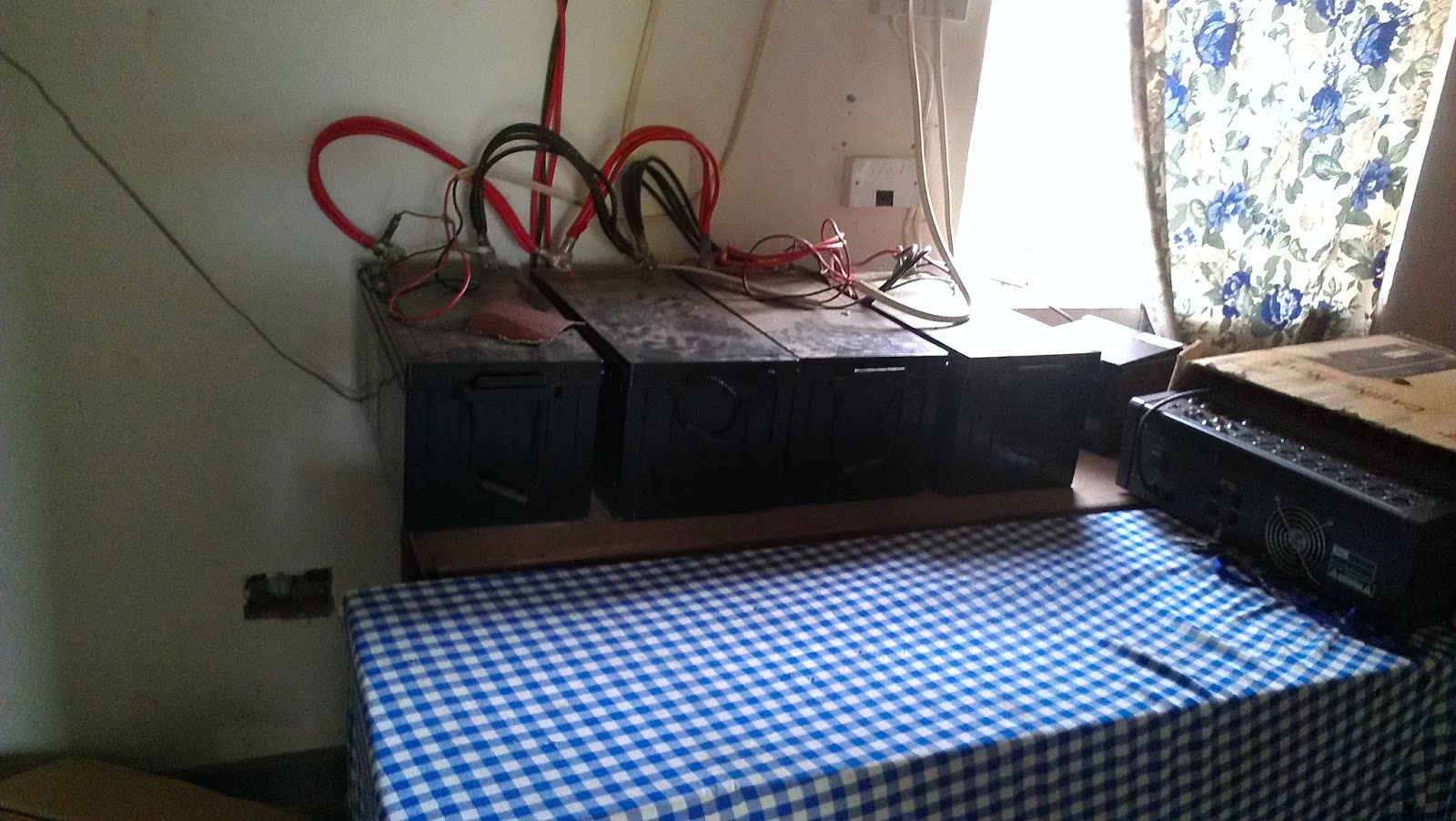 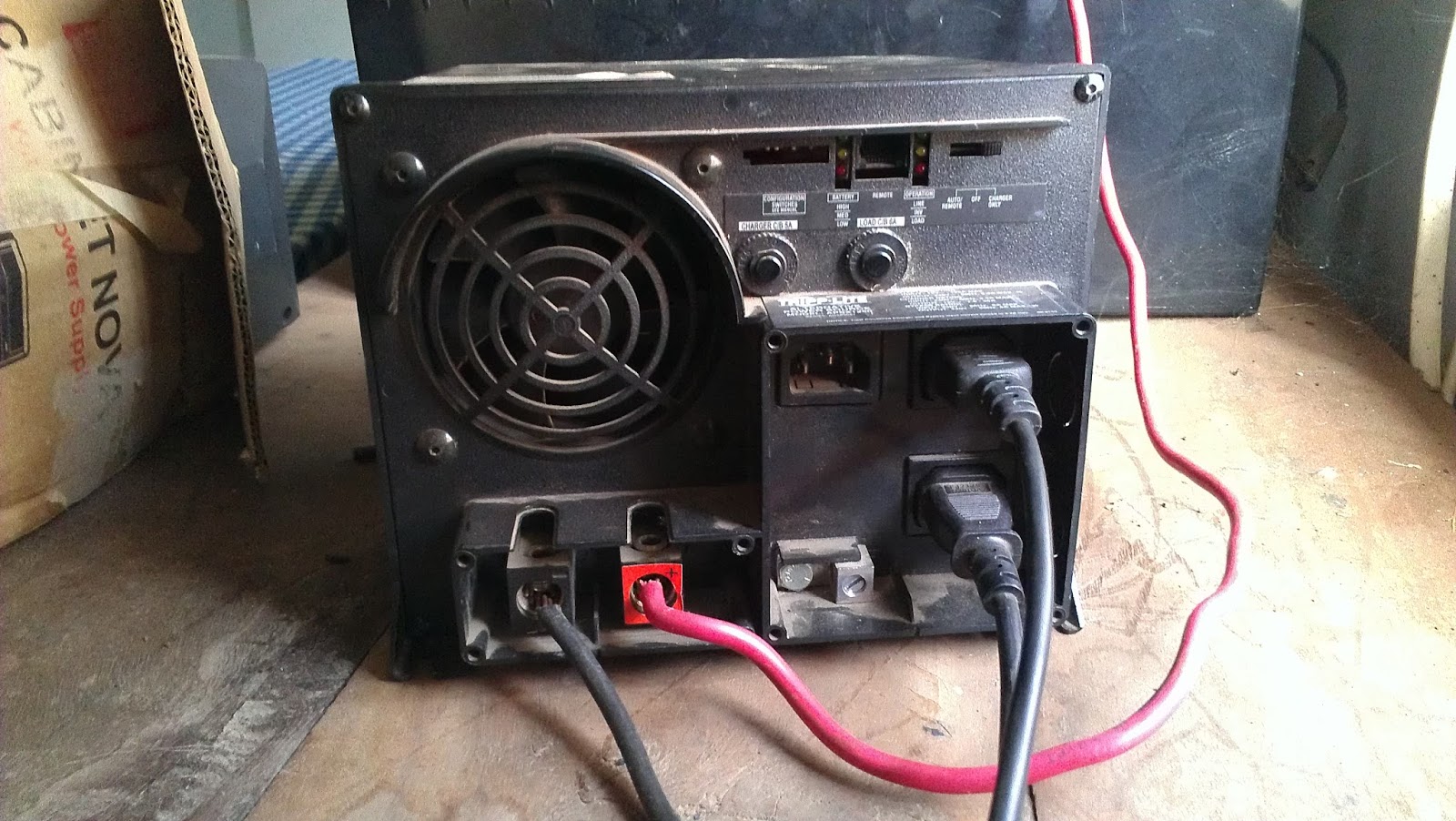 I’m teaching ICT at night, because the current class schedule is insane and doesn’t allow for ICT during the day. Or rather they’re not willing to give up time during the day. I’m teaching 3 nights a week, in order to fit in all the Year 2’s, which is the only year I’m teaching right now. The students are split into three groups called streams, and so each night is supposed to be a stream. The largest attendance I had was on Night One, but after that it’s steadily dropped off.

Many students are studying for exams, but I suspect many of them have been waiting for the computers to start working before they start coming. The students call these practicals, and not a night goes by when someone doesn’t ask “Madam, when will we have  practicals?” However, in a Year 2 of almost 200 students, only about 62 total have come to two weeks of classes. So I figure I’ll give those students first dibs on the “practicals”, while the rest will wait and learn some sort of theory first before jumping in.

When I started teaching, I didn’t want to go too low, so I didn’t define some basic terms like ‘mouse’ or ‘keyboard.’ It became evident that while many of the students had heard of computers, they had no idea what anything was called or how to use any of it. So the next lesson I defined things, and still it takes them a while to remember the terms and how devices work together. It’s a bit unfair to them really, that the outside world of applying for jobs or moving up in their lives is becoming more based on computers, while they don’t really receive good computer instruction at all during their education.

I’ve also been teaching Maths, though the way that happens has changed 2 or 3 times since the term started. At the beginning of term, we were grading exams, and so classes were sort of a free-for-all. I hadn’t been assigned topics so I wasn’t really teaching, just grading exams and trying to keep my house in order (turns out I’m super bad at cleaning house every day). Then we organized a slot on the timetable (schedule) for me to teach, and  I was subsequently out of town for various reasons (not on purpose) on that day. The one day I came back and taught in my schedule was a good day. Then the Director of Studies announced we were combining all the streams to teach in mass classes because all the departments had too many subjects and not enough time really. So that week ended in me teaching Math for 2.5 hours, trying to cover as many subjects as possible.

Now the timetable has changed again, because the school is playing host to some British visitors, who have been giving high priority. They are now taking two hours in the morning to discuss instructional materials, theory, and early childhood development. It seems no one on the staff besides the principal knew that they were coming. Even they were confused at the timing, asking why they were teaching during exam prep. But they had already come and couldn’t really go back, so the schedule was shifted.

I’m also attempting to work on HIV/AIDS awareness at my school. We’re working with the Anti-AIDS club at my school to arrange some activities for close to the end of term. But it’s not finalized yet so I don’t want to spoil the fun!

That’s all school-wise I can think of at the moment, but I did want to mention that I white-water rafted the Nile for the 4th of July weekend with a bunch of other volunteers, and it was definitely worth the obscene amount of money I spent over that weekend. It was loads of fun, and there’s a professional photographer that goes along the river, so there’s some pretty great pictures of me falling out of the raft. Class 5 rapids baby! I’ll be sure to upload them when I have the time/internet.

I don’t take a lot of pictures, but I’ll try to be better about it.
Until next time,