This week, as we march toward March

This week was great because I finally moved into my house. I can unpack my bags and settle in to a place that's completely and totally mine. My first night in the house was Monday. I was really excited to put up a calendar I brought because it's a calendar showing pictures of a camp I went to in Michigan. Something to remind me of home. I had no way of putting a nail in the wall, and there was a screw on the wall from when a previous resident hung a picture. So logically, I took some scissors to make a bigger hole.
Mistake #1: Assuming the scissors were not that sharp
Mistake #2: Putting my left hand directly behind where I was making the hole
Mistake #3: Having a lot of oomph
I cut a circle about the size of a thumbtack out of my left index finger. The cut wasn't too deep, and I actually didn't even feel any pain for about five minutes. Probably because for those five minutes I was running around like a crazy person who hadn't unpacked attempting to find bandages, anti-bacterial cream, and soap. Oh, and also attempting to not bleed all over the place.

But what's moving if you don't get hurt a little bit? My finger is fine now; it's just annoying to type because I kind of use my index finger a lot. You live and you learn.

My house is wonderful and beautiful and I love it. I was feeling pretty down while staying in the guest house because even though it was very nice and accommodating, it just felt like I was homeless and had no where to put my things. I was very dependent on others for food and water, which is a little annoying.

I went to the market yesterday with one of the college secretaries, Alice, to buy some food for when my stove is in action. Right now the market is still pretty overwhelming to me: lots of people, everyone stares at you, as a white person you get overcharged for everything, it's hard to tell the difference between “good” and “bad” food because you're not used to the food, etc. I was happy Alice came with me, and we talked and she invited me to take a walk around campus in the evening anytime I wanted. Some of the staff have commented I spend too much time in my house, which is the same thing my homestay family said about my room. I try to explain that Americans spend more time by themselves, and I remind myself that I'm integrating at my own pace. It doesn't do well to compare myself to others, and besides, I've only been at site a little longer than a month.

My house has two bedrooms (with mattresses and bed frames) electricity, running water, and dining room and sitting room furniture. I am very thankful for the housing which has been provided to me, though I know I would have been able to adjust and be happy anywhere, I am very comfortable and I think it bodes well for my service (and for any visitors who want to come see me! Talking to you, PCVs downcountry and to my American friends and family).

I got my gas tank for my stove delivered today – my neighbor kept it for me until I got home. I was so freaking excited to cook, so I present to you my first meal. Grilled cheese, an egg, and water. More pictures of my house to come, I promise. 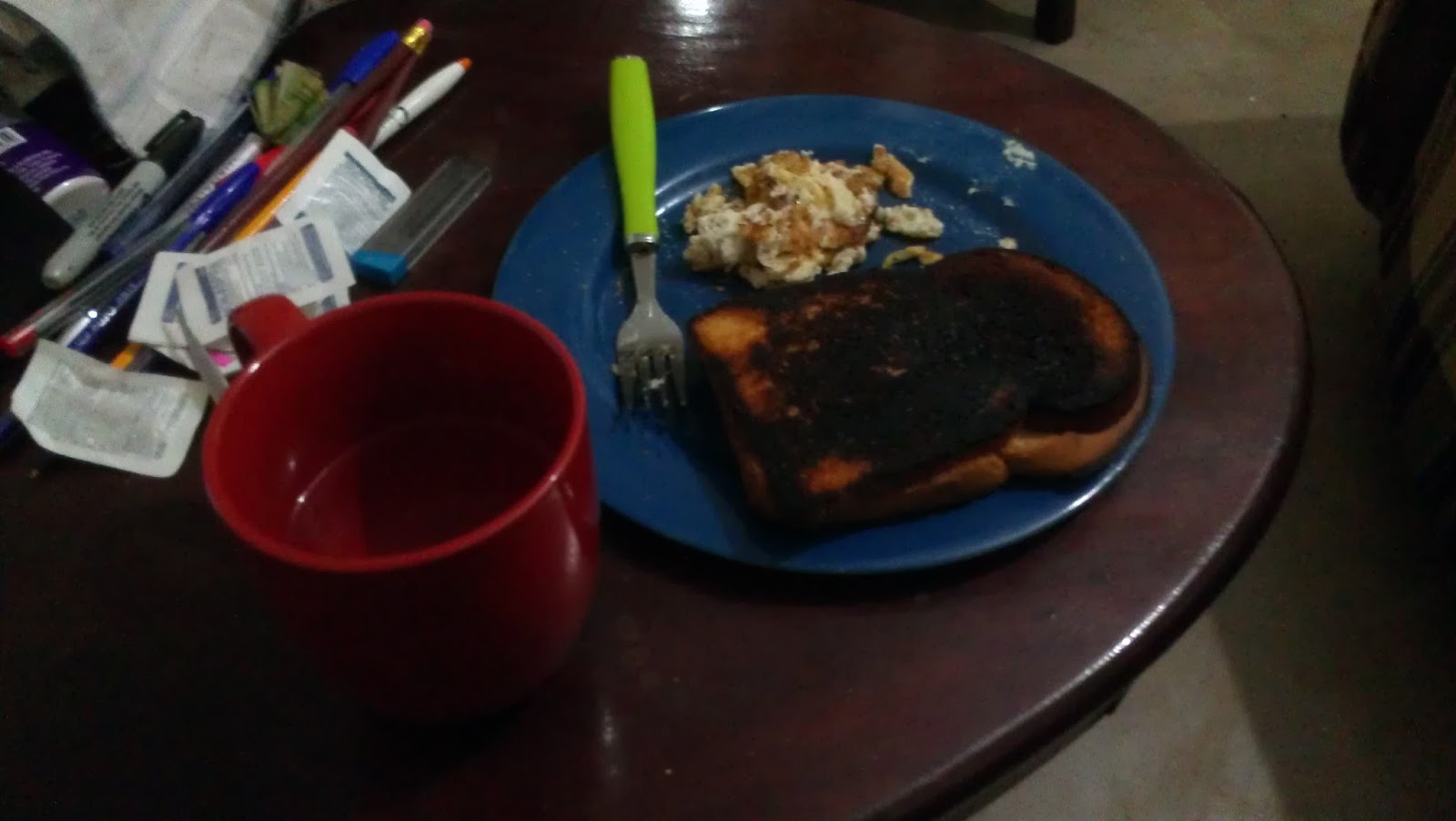 Today was pretty busy; I had a departmental meeting for the math department, where we decided who is teaching what and went over what we expect to accomplish for the year. I was also scheduled to attend a meeting for PES (Professional Education Studies) which was scheduled at the same time, because teaching computers falls under this umbrella. Unfortunately I have not figured out human cloning, self-replication, or time-travel, so I missed that meeting. Seeing as how I'm not teaching computers until term two, I think I'll just speak to the head of the department in the next week when I get a chance.

Tomorrow I'm excited to do laundry and clean my house. Strange? Nope. Clean clothes, a clean house, and not having to leave said house for breakfast are some of the best things here. Even if the curtains on my main window fell down because one of the supports fell out of my wall. It'll work out eventually.

I keep thinking about how sometimes people tell stories about their first apartment or the first place they lived on their own, how it was full of roaches or they had noisy neighbors or it was very very very very small. I keep how thinking about how the story of my first house is going to be different. It will start with, “I was in Uganda.”
Posted by Unknown at 28.2.14 No comments:

Pictures from Swearing In

Swearing In and the Aftermath

I had a whole post typed up and then I deleted it because I felt like I wasn't really saying anything. So let's try again.

Our swearing in ceremony (to make us official volunteers) happened on January 22nd, at the Ambassador's residence. Everyone looked fancy, and I actually participated twice in the program: the first time I sang the National Anthem with three other people from our group, and then I and three different people performed a spoken word piece we'd organized just a day or two before. It was exciting! We got to meet other volunteers from different regions of the country, and all our supervisors came as well to enjoy the ceremony. There was good food and good friends, and it was nice to relax after a long time in training. We were no longer Trainees.

The day after swearing in, we had a day-long workshop with our supervisors to further enforce what our roles and responsibilities at our school were, and to talk about cross cultural issues that could arise. We as volunteers also had to fill out a big evaluation covering our entire pre-service training which was a little exhausting but necessary.

The next day, those of us who had to travel the farthest (namely, the West Nile group and the far Southwest group) left the training center at 7:30AM to go to our respective bus parks. Large coach buses (sort of like Greyhound) are the cheapest and most effective way to get long distances across the country. Our bus didn't actually leave until around 10:30AM, so we were waiting at the bus park for maybe an hour or so before boarding.

The bus trip took about 8 hours, with stopping to let people off at respective stops and stopping once in the middle at a larger rest stop/gas station to, as the conductor put it, "let us ease ourselves". I stayed with a fellow volunteer in Arua for the night, and then continued on to my site the next day, further north, about half expecting my house to be finished. There was still some construction to be done on it when I visited in December, which they said would be done by the time I arrived.

It wasn't done. So I was once again put up in the church's guest quarters, which are very nice - running water, toilet, shower, a sink in my room, electricity that charges almost all of my things. After some discussion and talks with Peace Corps, it was decided I'll be moving into a different house on campus, where currently a VSO Volunteer is living (VSO - Voluntary Service Overseas, like European Peace Corps).

I'm actually happier about this, because I think it'll be easier to integrate into the school community first, and then reach out to the larger town community second. The original house is off campus and down the street somewhat, which is not far, but far enough. The new house also has running water, a toilet, mostly stable electricity, and if UNICEF agrees to keep it there, a refrigerator. I am living the high life! I have to wait a few more weeks to move in as the VSO wraps up her activities here and moves on to another job in a different part of the country. That's the hard part.

I'm not cooking my own meals right now, and it's a little frustrating, but my fellow volunteers tell me I'll miss it when it's gone. I tell them I'll appreciate waking up and not having to leave my room/house for breakfast.

School started today, but all that really means is that the school is officially open and the teachers are coming back. Students are still waiting for their final exams to be released to see if they can attend this year. Those results are being released today or tomorrow. Wednesday I'm meeting local leaders and law enforcement, and Thursday I have a staff meeting where I'm introducing myself and my job to the rest of the teachers.

Other than that, currently I'm just trying to keep busy. Time moves a lot slower here, and my planner is not so filled with every hour planned out. I don't have lesson planning to do until my department meets together. Here you just do things eventually. Ugandans call it "keeping time" when Americans/Westerners do everything to the minute. One staff member told me he had an American lecturer at his university and that if that man told him 8:00, the lecture would start exactly at 8:00. This of course is not strange to Americans, but here it is, where I'm told if I want to have a meeting start at 10:00AM, tell everyone to show up at 8:00AM.

I'm finding, slowly, more things to do without electricity, much of it writing and reading. I have always wanted to publish a book of short stories, and now I have time. Also poetry.

I'll probably update again after the staff meeting or possibly when I move into my house. Until then, as we say here, stay well.
Posted by Unknown at 10.2.14 No comments: