So recently (as in like last month?? gosh how time flies) I spent a week hanging out with basically ALL of PC Uganda. We had our annual All Volunteer Conference, and it’s pretty much the best conference/training I’ve been to yet in country. We call it All Vol for short.

Save people who were on vacation, and our GHSB (Global Health ??), all volunteers in Uganda were required to attend. This meant there were about 150 volunteers, all in the same place, from all the different sectors – Health, Economic Development, Education, and newly formed/separated Agriculture. I know my group, which is around 40 people. I know a good portion of the Ed group before me, which is maybe another 20 people. And I know a few random non-Ed volunteers, which maybe puts me up to 80-90 people, still leaving a good portion of the volunteers unknown to me. This is especially true because many of the volunteers I knew have just left, or COS-ed. So many of the volunteers I didn’t know were from our newest group, sworn in for duty around August 7th.

The conference began with an SNL Weekend Update type opening, with a good mix of silliness and needed information. After that, we began the best scheduling decision I’ve ever seen at one of our conferences – a technique called Open Space.

So volunteers got up and said which sessions they were going to facilitate, whether it was about travel in Uganda, working with Books for Africa to get books in your schools, literacy activities, all the way to things like yoga and American football, hairbraiding, and then back around to serious policy discussions with Peace Corps staff. I think it worked out beautifully, only having hitches if we had to move people around to different rooms and such, but even that didn’t ruffle many feathers.

The conference was technically only two days, with one day on either end relegated for travel. So we really had about two days worth of material, but it was really cool. A lot of people took notes on all the sessions, so that in the coming weeks that information can be disseminated as well as uploaded on PC UG’s private wiki for everyone to access.

It felt like the volunteers owned the conference, and it was a new feeling for a lot of us.
We also had Peace Corps Prom the last night! In which many of us bought ridiculous dresses/suit coats/outfits from our local clothes market. Some choice pictures which I stole blatantly from others’ Facebooks.

Will continuously add pictures as I get better internet. 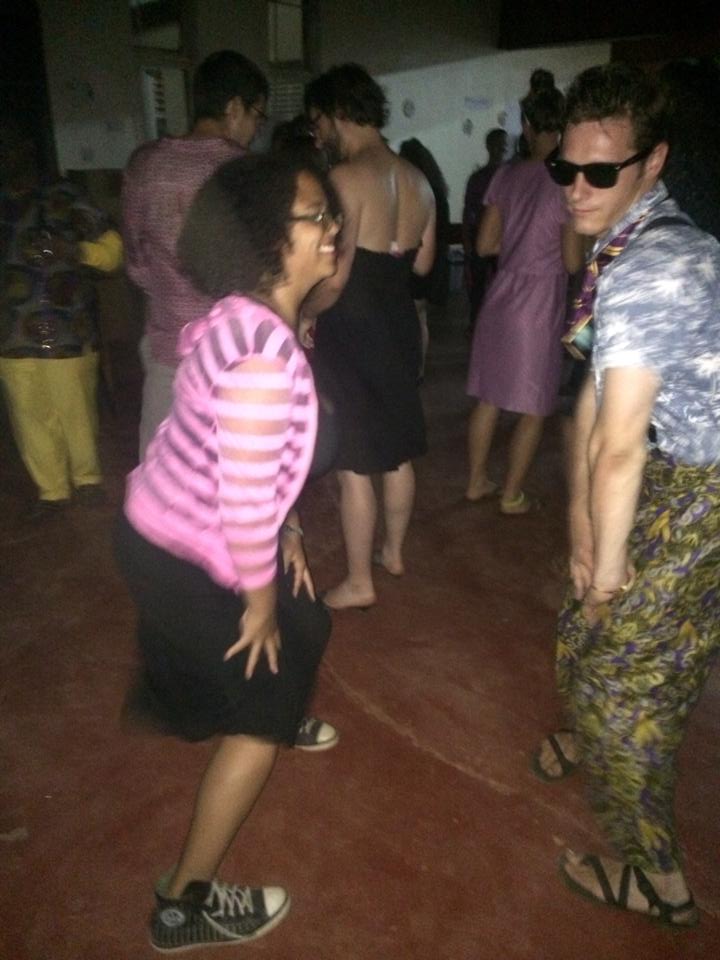 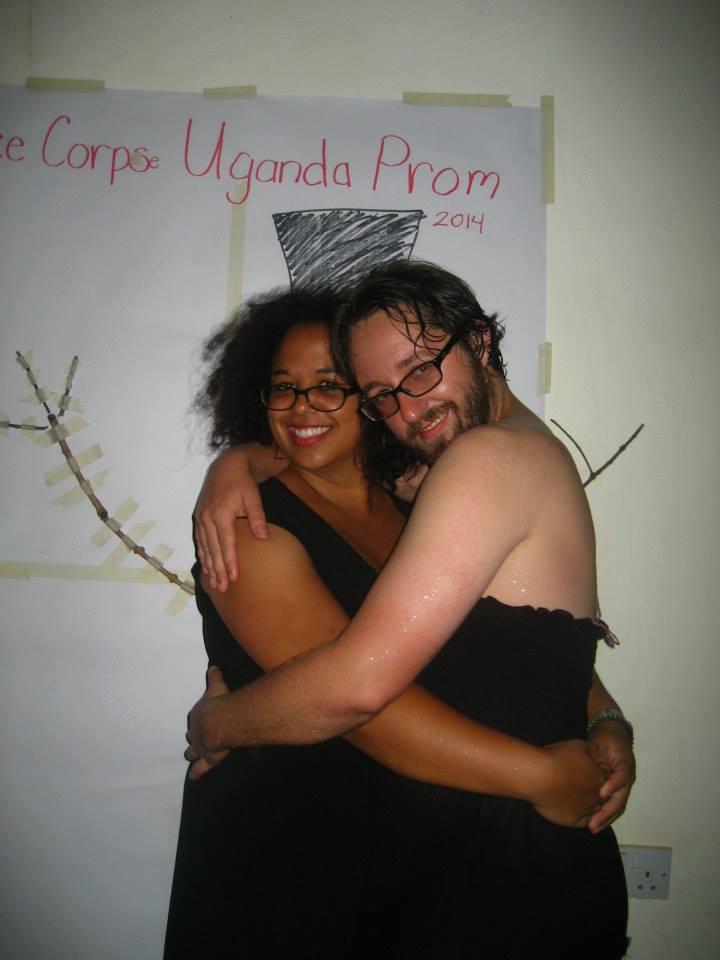 This is the Bus Ride That Never Ends: Why I’m Avoiding Gaa Gaa Buses For the Forseeable Future

Hey cats and kittens, lemme tell you about the two longest bus rides I’ve ever been on and how they were within two weeks of each other, and how I’m not going to take that bus anymore.
The first was on my return to site after going to our All Volunteer Conference (more on that later). Imagine you are me, because I will be telling this story in the second person. Deal with it.
You specifically take buses which leave early in the morning because it takes 9-10 hours to get up north. You leave the hotel at 6AM in order to walk to bus park in order to get a seat on a bus leaving at 7AM. Good so far. The bus leaves relatively on time. Also good. Less than two hours outside of Kampala, the bus breaks down.
This is how you know your bus is broken:
Instead of stopping momentarily (with the bus running) to drop someone off at their stop, the bus is turned off.
The turn man (like mechanic/loader/person who assists with turns in the city) is underneath the bus
The conductor and driver are out at front pointing at the bus
Angry Ugandans are yelling at the bus staff
Some passengers immediately seek alternate transport (taxis, bodas, etc)

So the bus breaks, it’s like that for maybe an hour, then you start moving again. Hurray! You think that maybe it was a minor problem and you’ll just be slightly delayed. You are wrong.
After two hours the bus breaks down again, and this time it stretches into three hours waiting by the side of the road. You take your things off the bus, thinking a replacement bus is coming. It is not. There are other buses from the same company your bus is from, but they are going other places, meaning it would only be a matter of time before you’d have to get off and pay more for a taxi (or probably two or three taxis) to get where you’re going.
You sit and drink a pop and eat some hardboiled eggs, because there is of course no real food in the village/trading center where you have broken down. Every time a bus comes by you think it is this fake replacement bus, but really there are just a hell of a lot of bus companies in Uganda, going every which way.
Then they ask you to reboard this bus, the one which has broken down, which you are convinced is not a good idea. But you get back on, and eventually you reach your destination, 15 hours after leaving the capital city. You cannot possibly get back to your site (another two hours from the city you’ve just arrived in) so you stay with another volunteer and head back in the morning, still pretty exhausted.

Guess what? Now you’re going to a neat literacy conference in the East of the country, so you have to take a bus back to the capital. Stupidly, you take the same bus company thinking maybe the other time was an anomaly. You are again, wrong.
The bus this time makes it almost halfway through the trip before they pull over and stop. You think maybe, just maybe, if you remain calm, they will fix it quickly and you will keep going, like your positive thoughts will flow out into the world and fix everything – WRONG. They give up on fixing it because it requires a part they don’t have and don’t carry with them regularly. You are now waiting for the later bus which is coming behind you. You wait for three hours, during which a drunk/mentally disturbed (or both) man tries to tell you that you’re Korean/Chinese and that he is a Korean trained commando who will protect you from other men, because you are his madam.
On the plus side, you do end up having a pleasant conversation with a University professor who is from Uganda, but spent some time in Canada and the last 30 years teaching in Lesotho. He’s pretty cool, and pretty chill, and so keeps you good company for a while. You also have made two friendship bracelets so far in the trip, and given one of them to the bus’s conductor.
The other bus finally comes; there are only a few seats, and you get one of them! It’s a tight fit, but you at least left behind the broken bus and are now on your way. Also, when you were leaving the other on the side of the road, the bus coming the other way (from the capital) stopped to give the broken bus a new part so they could fix it. You didn’t really think they’d be able to fix it, which is why you boarded this new bus.
The new bus goes for half an hour, then stops momentarily at a gas station for food and people to go to the bathroom. Then your old bus pulls up beside, apparently having fixed itself. Maybe. You’re told to get back on the old bus and you respond that you’d rather ride a bus which has not broken once. Then the conductor of the new bus says if you are in a hurry, you should get on the old bus. Why you might ask? Because now this new bus has a mechanical problem. You heard correctly. You have a choice between a broken bus, or a broken bus. These are your choices. You have not enough money and certainly not enough language skills to take any other form of transportation.
So you get back on the old bus, certain you have made a mistake, you have lost your coveted window seat and are now sitting next to a mother and her five-year-old who only stops crying when asleep. And she doesn’t sleep the whole time. And she’s sick. And sneezing/coughing everywhere.
The bus, surprisingly, does not break down again, and you make it to the capitol about 4 hours behind schedule. Huzzah!

Congratulations, you have just lived my last two bus rides. Isn’t it fun to travel?  : )