It occurs to me that I told everyone in Uganda what I did for World Malaria Month (April), but not everyone at home! So let’s fix that.

In late March I attended a workshop which mainly focused on HIV/AIDS awareness and activities, but also focused a small amount on malaria. We were encouraged to do malaria activities in our schools and communities to raise awareness and educate people on the disease. I, with another staff member at my school, co-planned a week of college activities involving the students and the staff.

On Monday April 21, we had a Health Officer from Yumbe hospital come to do a general talk about malaria. HO’s are like emissaries from the hospital who work with VHTs (village health teams) to educate Ugandans, especially in rural areas, about healthy habits and preventing disease. Save any outside organization loaning management help, VHT’s are comprised of only Ugandan nationals.

Tuesday, the students organized skits around malaria myths and facts. I had wanted them to do it completely on their own, but to make sure they got the correct information I gave some example situations. For example, a man is told by a doctor that he should sleep under a net every night. The man says he is strong, has had malaria before, and is okay, so why should he? The answer we’re looking for at that point is something like, just because you survive malaria doesn’t mean your family will. If a mosquito bites you and you have malaria, then it can be passed to your children, your elderly relatives, or people who are immuno-comprimised  like people with HIV or AIDS. Other myths include that sleeping under a net will give you cancer, malaria is spread through saliva, and malaria is spread through sexual contact.

Wednesday, we had a demonstration of how to hang the net on the dorm beds provided here. They also talked about how to hang the nets when you don’t have four poster beds. Many people who live in huts just sleep on mattresses on the ground, and so it’s much easier to hang a net from a single point on the roof. To do this, they gather the top of the net with rope or by placing a bucket lid underneath and hanging it from that. We also talked about repairing nets and washing them. They actually need to be washed about every 4 months to reactivate the insecticides. Only about 13% of Ugandans currently sleep under nets, which is a ridiculously small amount. As a facilitator at one of my workshops said, mosquitoes live less than a month. So basically if the whole country slept under nets for at least a month, malaria would be almost wiped out.
Thursday, we had another skit in the form of a radio show (they unironically love drama and skits and music here, which I love). Some of the students posed as local health authorities, nurses, doctors, district health officers, politicians, etc. Then they called on the audience to have “callers” into the show. Radio has a large presence in Uganda, mostly because it’s an oral culture, and because lots of people don’t read. They especially don’t read their local language. So lots of broadcasts are in multiple languages and they even have BBC World Service at 6pm each night. I still need to get a working radio, because even though most phones come with FM radio transmitters, it’s not powerful enough to pick up the signal for BBC. Sad day.
Friday was the culmination of our activities, when we had a sort of a game show program, which probably would have worked better if the students were split into groups. (There are 450 students at my college, and most of them showed up at the event on Friday.) We also drew names for giving out new mosquito nets to the student body. Unfortunately the grant I received for my activities didn’t cover buying nets for the entire student body, so I bought 35 and said I’d look for funding for the rest. My hope is to by the time I leave, have a storage and checkout system so that all students who come to the college have a net to use while they’re here.

The entire week was exhausting, but the results were good. I got good feedback from my students and staff. Peace Corps Africa had a competition in April among the countries to do lots of malaria activities (each activity had a point value). Uganda ended up winning! Makes me proud to be in Peace Corps. For a while I thought competition was silly as a motivator, but knowing that we were competing against all the other countries made me want to do more and more.

Malaria isn’t just an April problem, but an always problem. So while I’m thrilled with all the things I did, I look forward to doing more, multiple times a year. I urge you to donate to organizations which provide nets, malaria education, or anyone who is researching a vaccine (which would be awesome!). And thanks for reading. 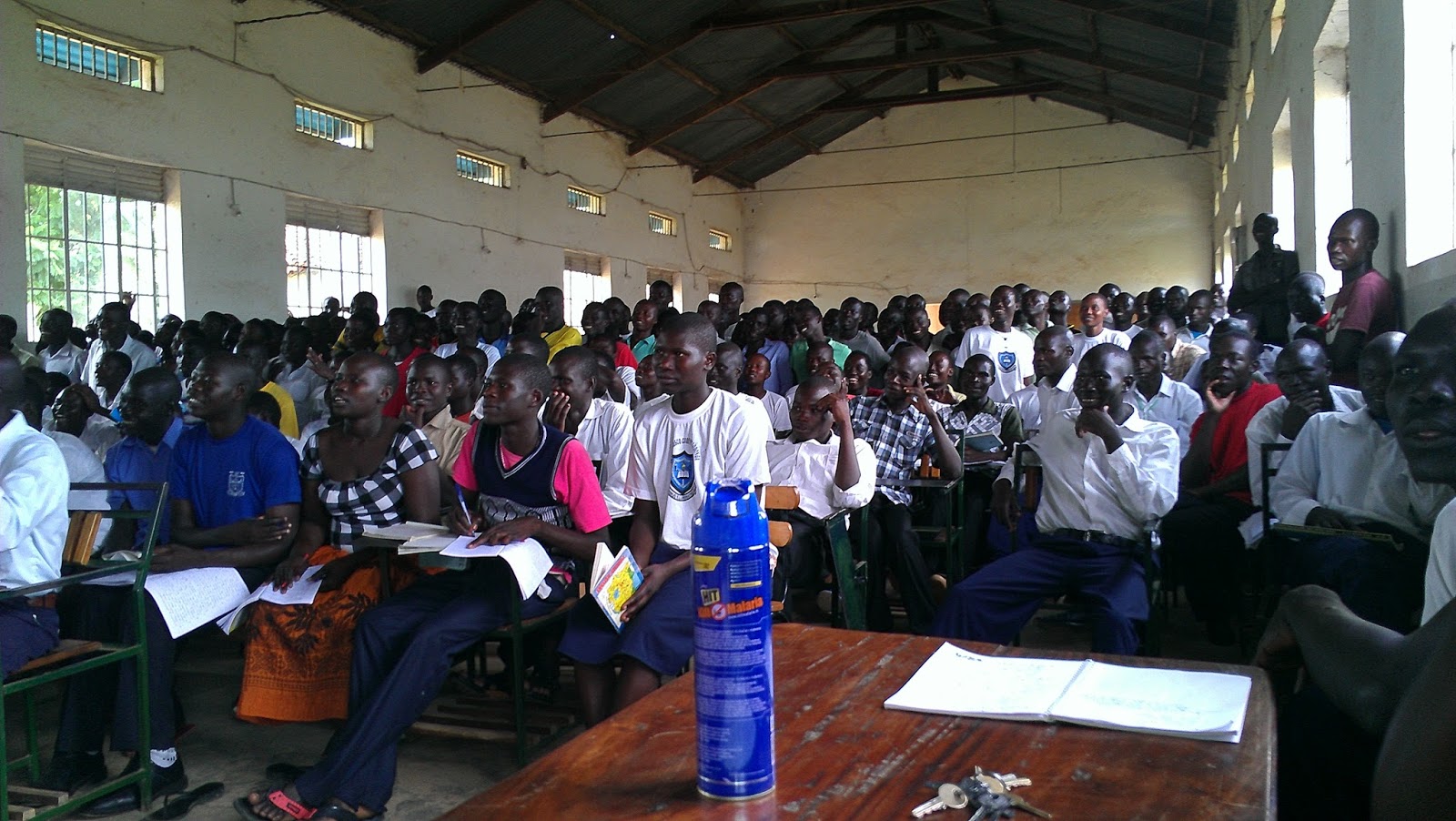 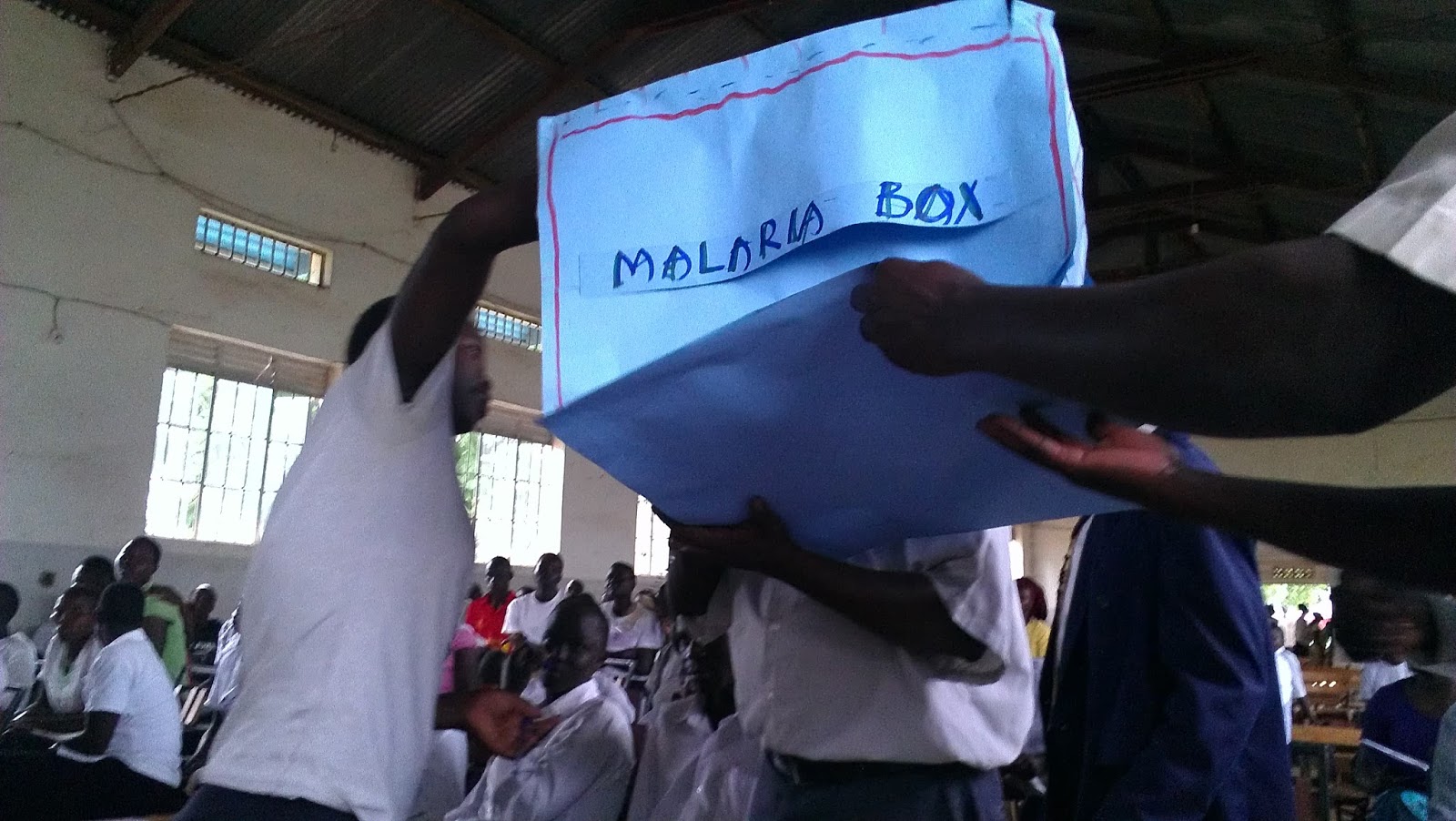 School is back in session. Sort of.  Students started arriving Thursday, but classes won’t actually start until sometime next week. Most deadlines in Uganda are soft deadlines. For Americans, it’s hard to adjust to, but a lot of people here just take it in stride. They say things like “Americans love to keep time” as in, “Americans start things on time”, but don’t really make any in roads to change their attitude on time. So far I’ve been spending my time lesson planning, both for maths and ICT, and attempting to get electricity back in the ICT building so I can test computers and computer accessories.
Currently the electricity is wired to the administration building so the secretaries can type memos and other official documents. I don’t have a problem with this except that, as previously mentioned, there’s no power in the ICT building.

When I got home after traveling for a few weeks, it felt different. It felt good and like I was coming back to a place where I was home. I started baking using a dutch oven (stop laughing you know who you are). Dutch ovens are basically the Russian nesting dolls of baking. You place what you’re baking in one pot and place it inside another larger pot which has rocks/sand in it. Then you cover the whole thing. The rocks/sand act to hold the heat like a real oven would. I still need to get a giant pot to use specifically for baking; otherwise I end up baking cookies like 3 at a time. But the bread I’ve made so far has been awesome and wonderful and did I mention I love baking?
I’m feeling more at home here and the community feels more like home. The children of my fellow tutors come by to play, though some days I have to turn them away because I need to do some work or if I just don’t have the energy to play. My fellow tutors come by to discuss American culture, Ugandan culture, and things going on at the college.
I’m feeling more and more comfortable in Uganda, and with a new group of Business/Health volunteers coming in June, my group won’t be the newbies in country anymore. Looking forward to this term and the challenges it brings.

Hello all who feel they want to send me things - here are things I want! I'll try to keep it updated on a weekly basis with things I've received so I don't get doubles. I love you all and appreciate your love and support. Keep in mind it takes about a month to get to me! Please try to wrap food in hardy plastic so that insects don't get into it as it waits for me at the post office.

HOBBIES/KEEPING MYSELF SANE
sendairtime.com - this is to buy me airtime (basically like minutes on a US prepaid phone) - if you're doing this option please contact me for my numbers as I'm not posting them on a public site. buying MTN airtime helps me with internet and call my non-PC coworkers, Orange Airtime lets me international minutes to call home
Mod Podge
Sticky tack!!!
TIME or Utne or Mental Floss for me!


FOR THE KIDS
Construction paper
Low level (early elementary) spelling/children's books, hopefully ones that deal with Africa or African themes
Old magazines - kids magazines are best but ones with lots of pictures are good, also maybe some
Finger paints

End of Term Wrap-Up and IST

So the first term at my PTC ended this week. I left early because my group had a training in Kampala. There were no end-of-term exams because they just didn't end up getting made? So the plan is to make beginning-of-term exams and the students will take them when they return.

I only actually taught for about 4 days out of the whole term. The last month of the term, the Year One students were taught in mass classes (like college classes in the states), because the Year Two students were out for school practice and most tutors were out observing them. I didn't want to teach in mass classes, so I waited for a few weeks and then started teaching. However, the timetable (what we call the schedule here) was still not finalized, so despite having set times to teach math, sometimes that didn't happen. There are also classes scheduled at 7:30, when assembly is supposed to end, but most often assembly goes over and we don't start until 8 or 8:15, and at that point I refuse to teach because I think it's a bit useless to fit an hour's material into 15 minutes.

So I now have to finish my unit in term two along with teaching a term two unit. At our IST training this past week,  we spoke about rearranging the curriculum to make mathematical sense (learn operations before factoring). The problems we found were not so much that the curriculum was out of order, but that the tutors were teaching everything simultaneously vs in order that makes sense. I'm going to try to speak to the math department when I get back to school and see how we can make things better.

I finally bought a new power cord and a new powermatic (power adapter)!!! My wonderful mom is sending me/sent me a power cord but I feel better with two, one to keep at site and one to travel with. I'm also in a place now where my internet modem gets good service. Looking like I have to buy one from a different carrier to get internet at site.

Overall I feel like I'm moving into a better place emotionally and mentally. During the middle of the term I was pretty down, but now even small things that happen I take as a part of life. I lost my raincoat transferring taxis on the way back to site. I think at first I would have been pretty upset, but I just accept theft/loss as something that happens here. Many people don't leave UG with any clothes they brought here, and sometimes that applies to possessions as well.
I lost three days instructional time because of Easter and other college activities, and while it was frustrating, the frustration just went away and I worked on a malaria project we were doing in April.  I think I'm integrating better in my community, working on stress relief better, and adapting to sometimes just not having my computer or internet. I'm excited to work on projects for the rest of the year and visit people at their sites.

I really wanted to go home, and I'm really glad I didn't. I'm excited for my service, and the future ahead.